Skip to main content
EXPLORE OUR WORKSMART BLOG FOR LOADS OF TIPS!

Add more players to your existing Who's First Buzzer System! 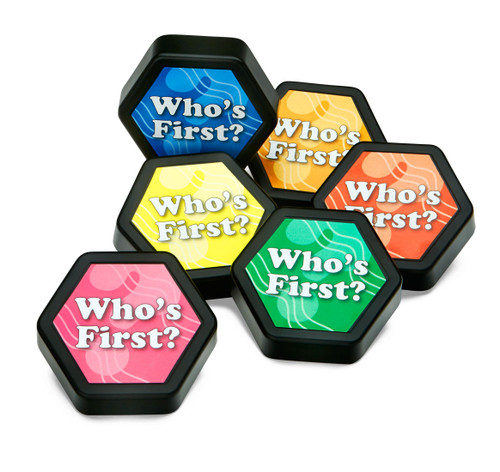 Who's First? Buzzer System comes with a Light Tower and 6 different-color team buttons.  This set of 6 Extra Touch PADs lets you expand the number of players who can buzz in for each team.

NOTE: This set of extra touch pads will not function on their own. Must be paired with existing Who's First Buzzer System, remote and light tower. (#WHOR7W)

MORE ABOUT WHO'S FIRST

ENJOY COMPETITION WITHOUT DISPUTES!  Add gameshow excitement to your classroom or meeting with this snazzy, updated model of our popular Who's First? 6-TEAM classroom gameshow light and buzzer system!

FOCUS ON YOUR CONTENT: Don't worry about figuring out which team gets to answer. Who's First know who rang in first with a hundredth of a second, so you can focus on teaching, not resolving conflicts!

TAKE THE GUESSWORK OUT OF WHO ANSWERED FIRST!  Who's First? is a stand-alone "buzz-in" game show buzzer system that will add excitement and real time technology to any fast-action Q&A game. The system identifies first and second place respondents with snazzy lights, a loud buzzer (which can be turned off, if desired), and 6 color-coded touch pads that announce who came in first -- and second!

RELY ON WHO'S FIRST!

NOTE: This set of extra touch pads will not function on their own. Must be paired with existing Who's First Buzzer System, remote and light tower. (#WHOR7W)