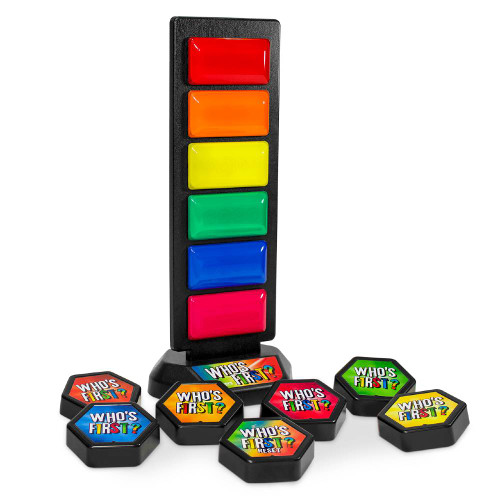 TAKE THE GUESSWORK OUT OF WHO ANSWERED FIRST!  Who's First?® Game Buzzer System is a stand-alone "buzz-in" game show buzzer system that will add excitement and real time technology to any fast-action Q&A game. The system identifies first and second place respondents with snazzy lights, audible buzzer sound (which can be turned off, if desired), and 6 color-coded touch pads that announce who came in first -- and second!

Who's First has been the industry standard for game show buzzers but the v3 model offers a bunch of new features:

Who's First? Wireless Game Buzzer System w/ Light Tower & USB port & Randomizer is a favorite of teachers and trainers worldwide!Add gameshow excitement to your classroom or meeting with this snazzy, updated model of our popular Who's First? 6-TEAM classroom gameshow light and buzzer system!

FOCUS ON YOUR CONTENT With Who's First Game Buzzers

Don't worry about figuring out which team gets to answer. Who's First knows who rang in first within a hundredth of a second, so you can focus on teaching, not resolving conflicts!

RELY ON WHO'S FIRST!

The Random Team Selection function lets you randomly choose who gets to answer next, rather than asking for for participants to buzz in.

SEE IT IN ACTION

Here's what people are saying about this "Trainers Exclusive":

"... I just wanted to write and tell you -- what an AWESOME, well made, easy to use product. I will use this with my students and during training sessions with the staff. I love the storage bag that came with it has a home for everything. This was a well thought out product and I can't wait to put it to use!" --Ryan from Hampstead Central School

"For 10 years we have been playing a Jeopardy-style game as a review for one of our classes, and it has always been a challenge (and sometimes source of great controversy) to figure out which team was first to answer the question. We've tried raising hands and other types of buzzers, but the teams that weren't chosen frequently argued that the judge just didn't see them, or that their buzzer sounded a split second before the other team's. It was stressful for the instructors who were leading the activity and distracted the students from the review as they got all wound up about whether the other team was unfairly getting more chances to answer questions. This takes all the subjectivity out of it. The flashing light is up there for everybody to see. It's just what we needed to get the focus off the process and onto the content. Makes the instructors happier too, since they don't have to make any more controversial judgment calls." --WV Catherder from Harpers Ferry

STAND-ALONE BUZZER: If you don't have time for a long Jeopardy-like game, you can also put together a quick 5-10 question quiz and keep score the old -fashioned way, on a chalk board or whiteboard.

SOFTWARE INTERFACE:  If you want to check the software interface, plug in the USB cable from the light tower to your computer. Then open any sort of word document. When you tap one of the colored buttons, you should see it type a number 1-2-3-4-5-6.  If no number appears, we might have a connectivity issue.

BATTERY CHECK:  Be sure to test your buzzer before any event. If the unit is not working, it's always good to check the power and/or the batteries in the touch pads.

Lights and Sounds Buzzers (set of 4)