Skip to main content
EXPLORE OUR WORKSMART BLOG FOR LOADS OF TIPS! 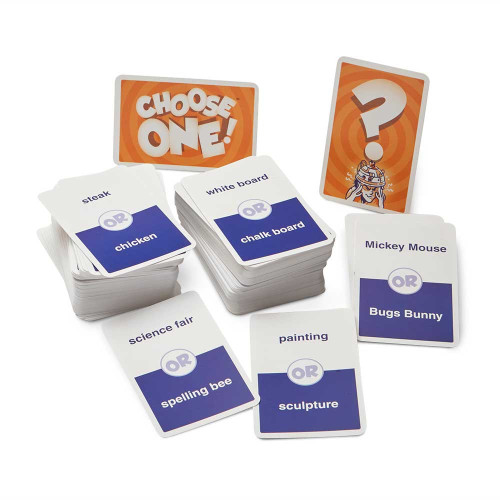 If you're on the lookout for new and unique icebreakers for meetings, trainings or classroom use, Choose One, by Loony Labs should be in your toolkit.

Choose One is a compact board game that is a quick and fun way to kick off any icebreaker session. Designed as a party game to be played amongst friends, you can make game night come alive in the office or classroom. The twist on this icebreaker is that instead of talking about yourself, you'll get to guess what makes others tick! Best of all, the game comes in a super convenient size so it`s easily transportable for any event.

The huge deck includes 300 "this or that" topic cards to help you get to know colleagues, friends or family members better!

Does your friend (colleague) prefer chocolate or vanilla? Would they like the window or aisle seat? Are they more afraid of snakes or spiders? These are just a few of the thought provoking questions you`ll face in this Either/Or board game. Choose One brilliantly distills the "Getting to Know You" process to its purest form!

TO PLAY:  Choose One is a game for three to 10 players, ages 14 and up. It only takes 20 to 40 minutes, making it perfect for any meeting: short enough not to lose people`s attention yet long enough to spur competition. The game board is flexible as well. For a quick game, players could agree to go only until six or seven points. Or you could simply play for a fixed time period with no game board. With 300 Topic cards, it will be a long time before anyone gets the same card twice.

The scoring system is based in the overall theme: "How well do you know your friends (colleagues)?" At least one player must get the Choice right and one must get it wrong. In that case, everyone who chose correctly gets a point along with the Chooser. If everyone chose correctly, then no one gets points. If everyone chose incorrectly, the Chooser gets two points. The rules warn against bluffing, which directly opposes the spirit of the game. It is about learning more about someone, thus giving the bonuses for something no one might have guessed and awarding no points for something obvious.

Choose One is great for competitive teams interested in getting to know one another better, as well as icebreakers for groups or offices.

How to Play:  One player, called the Chooser, selects a Topic Card from their hand and reveals it. The Chooser indicates their choice with their own Choice Cards. Everyone then votes by placing one of their Choice Cards face down. Their goal is to guess the color corresponding to the side of the Topic Card they think will be selected by the Chooser.

No Bluffing:  Bluffing is not a part of this game. The Chooser must not deliberately lie when deciding on their choice since the others are trying to predict what the Chooser thinks.

Discard & Draw:  When their turn ends, the Chooser may discard as many cards from their hand as they wish, then draw back up to five cards.

How to Win:  Each time a player gains a point, their piece is moved up one space on the scoring track. The first player to move their piece into the winner's circle is the winner. In case of a tie, continue the game with all players until a single winner emerges.

UNZIP-it! with Getting To Know You Conversation Card Deck

Which Are You and Why? Thumball

Getting to Know You Thumball

Unzip It Remote - Getting Acquainted Set