Help people get the basics of great teamwork! 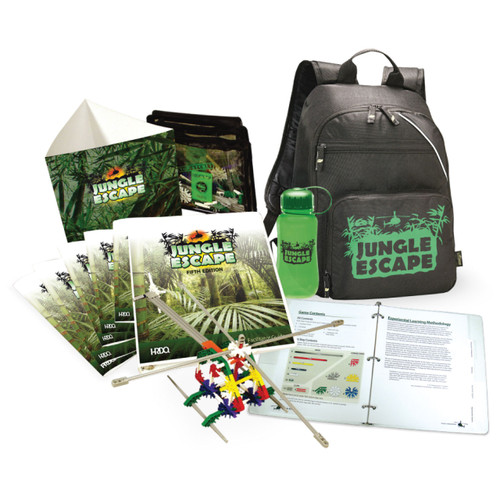 Jungle Escape, now in its 30th Anniversary Edition, is a high-energy team building game that's perfect for introducing and reinforcing the concept of effective teamwork, and developing the group process skills that are needed for cohesive team performance.

“Why can't these people work as a team?” The cry of frustration is heard every day in organizations while time, money, and opportunities drain away. Pushing people to be better team members doesn't help if they have don't have a clear vision of how a well-oiled machine looks and feels. And the fact is, they often don't.
An instant hit since it was first introduced thirty years ago, Jungle Escape is an experiential training game that takes new and intact teams on an imaginative adventure: having just survived a crash-landing in a remote jungle, a team of engineers must build an escape helicopter using the spare parts they were transporting.
Jungle Escape isn't just about fun and games, though. Real learning is quickly absorbed by the players as they discover and practice the critical skills surrounding the processes of team planning, problem solving, and decision making. Before they know it, they've experienced first-hand the research-proven differences between a well-functioning “Cohesive” team and a “Fragmented” or “Divergent” one.

It's bigger, it's better, and it's jam-packed with all sorts of exciting new features, from a cool eco-friendly backpack to enhanced Facilitator and Participant materials, a suspense-filled action video, and much more. Here's a peek at what you'll find:

Heck, we even added a water bottle for trainers with a thirst for learning!
So why do trainers – and audiences – love Jungle Escape?

First of all, the audience soon forgets they're in a classroom as they are quickly immersed in a survival scenario. They're having fun while the learning happens through the discovery and practice of critical group process skills such as planning, problem solving, and decision making. Trainers use it as a powerful way to introduce basic team building, improve productivity between multiple work groups, or energize mature teams. We guarantee it will be an experience that participants – and the organization – won't soon forget.

Uses for the Game

Jungle Escape is effective as a stand-alone activity or as part of a more comprehensive training program. Here are some suggested applications for the game:
How It Works

Jungle Escape is fun for your audience and a snap to facilitate, whether you are a novice or a seasoned trainer. The kit provides everything you need to deliver a powerful 90-minute team-building exercise, including:
Teams stranded in a jungle are challenged to build a helicopter to exact specifications using toy parts. They begin with planning how to execute the project, and when ready, they begin construction. Once the team believes they have properly assembled the aircraft, the facilitator checks the helicopter for accuracy and records their times. Typically, the team that took the most time to plan completes the helicopter in the least amount of time. Following the activity, team members take part in a discussion about team dynamics, offer insights, and create an action plan for improvement.
Use the game as a powerful way to introduce basic team building, improve productivity between multiple work teams, or energize mature teams.
THEORY & DEVELOPMENT

How Teams Function
Research suggests that the amount of time that a group allots to the planning and implementation phases of a project determines, in part, how effectively it operates as a team. Jungle Escape identifies three types of teams: Fragmented, Divergent, or Cohesive.

Fragmented Teams
Fragmented Teams are characterized by autocratic leadership and/or cliques that often press the group into making decisions. Typically, one person or a minority of the team members make the vital decisions during the game. Conflict is likely to be suppressed or ignored.

Divergent Teams
Members of Divergent Teams often consider many alternatives and tend to be overly cautious in their planning. They are often unable to reach consensus and resolve issues through voting procedures, and although group members go along with the majority, there is little commitment to the plan or final product.

Cohesive Teams
With Cohesive Teams, democratic processes are used, a cooperative atmosphere develops rapidly and everyone on the team is involved in structuring the work. During game play, you'll see cohesive teams work through conflict when it arises; generate excitement as the team work together on the construction; and experience a high degree of satisfaction with their group effort.

How Multiple Teams Function Together
Similarly, planning and assembly time are two important factors in inter-team performance. Depending on how two or more groups work together teams can be described as acting in one of three ways: Competitive, Non-interactive, and Cooperative.

Non-interactive Team
A Non-interactive Team limits its focus to its own team. They may spend a little or a lot of time planning; however, it is completed without consideration for the larger picture and the needs of the other group or team. As a result, their planning efforts are minimally effective to accomplishing the overall goal.

Cooperative Team
A Cooperative Team shares a common goal of getting projects completed together with other groups. When planning a project or task, a great deal of time is devoted to how the groups will work together to accomplish goals effectively and efficiently.

Includes everything you need to train up to 3 teams of 5-6 participants at one time.

All parts except for the Participant Guides are reusable. For training sessions with more than 3 groups, order one extra helicopter per team and a Participant Guide (#GAJUNP) for each additional person.

Houston We Have A Problem